Adding individual species is a work in progress. Go here for the full list of species in PDF format to download 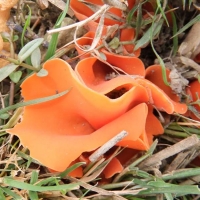 A cup fungus often found on the edge of woodland paths, in disturbed soil or even on gravelly paths. 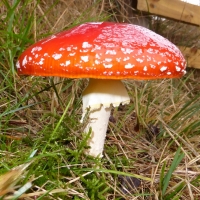 When the young fruitbodies first appear in the conifer plantations of FC they are covered in white warts and only as the cap expands do you see the red cap, still with white warts on it. However these warts can be washed off in heavy rain, leaving a red spotless fungus! Fly Agaric has been used as an insecticide by crumbling the fungus into a saucer of milk. 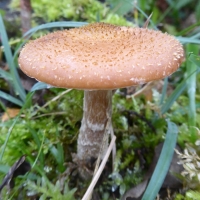 Honey fungus is parasitic on live trees. By the time you see the fruiting bodies the timber has already been killed. You may sometimes come across the black ‘bootlaces’ which grow under the bark of a tree, These are known as rhizomorphs and are a sign of honey fungus activity. 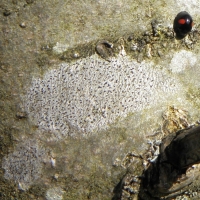 This can be found on smooth-barked trees at Foxglove Covert. The lichen body is up to 3cm across and the black fruiting bodies can sometimes look a little star-like.

It grows on the Ash trees at Kidney Spot Corner and you can just see a ladybird near the top right of the photograph. 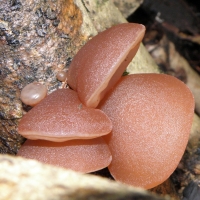 Jelly Ear grows mainly on dead or dying elder trees, but it is occasionally found on other deciduous trees. 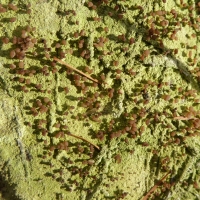 The green thallus of this lichen can spread to cover whole rocks. The fruiting bodies, known as apothecia, are pink-brown or rust-brown and are sometimes sessile, but here they are on stalks. At Foxglove Covert they are found on siliceous rocks. 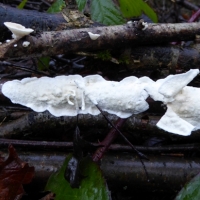 This is found on the fallen and decayed wood of deciduous trees. 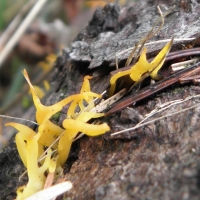 This small yellow fungus rarely grows higher than 1cm and is found in decayed wood.