It has been a busy couple of weeks with nest box ringing nearly completed, CES 5 and 6 in the bag, habitat management, mowing, strimming, loppering, school visits and species recording, to name just a few of the activities taking place.  Added to all of this the reserve is blossoming! Insects and other invertebrates are readily showing themselves, especially on sunny days.

This blog is a round up of the Foxglove dynamics!

So to start it - the Buzzards.  Volunteers have been out searching for Buzzard nests - and finding them.  Once found the chicks have to be ringed and unfortunately Buzzards do not use nest boxes!.  They usually choose the tops of trees or overhanging ledges.  This is where we thank our climbers, Sean and John.  This is Sean heading down to a nest, under an overhang, under another overhang!

John had to climb the tree to get to this one. 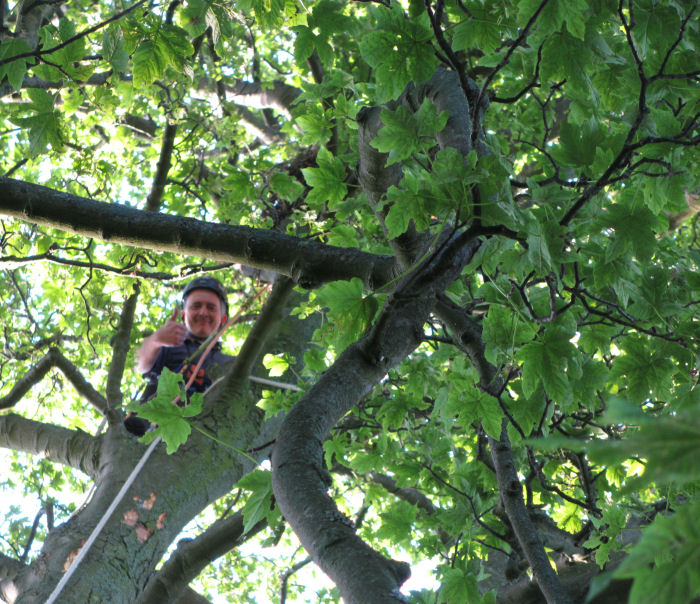 The chicks are put in bags and either pulled up or lowered down to be ringed.  Sarah is busy here ringing a young chick before it is returned to the nest.  Sean is somewhere over the edge and out of sight! 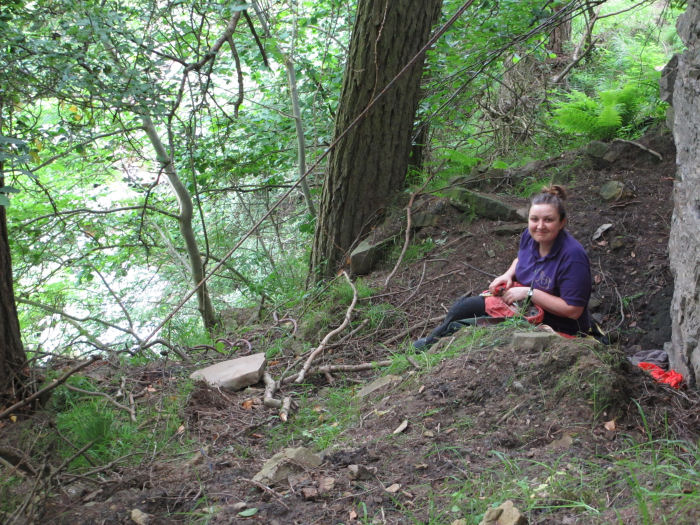 Most of the nests are now complete and over 20 Buzzard chicks have been ringed.  Thank you again to our climbers and to all those bird ringers who braved the not inconsiderable midge population on the the training area!

A Moorhen has been sitting on a nest in the duck raft.  The male was seen walking slowly up the ramp feeding the female and then running down it, back to the water.  Glennis managed to photograph the chicks in amongst the vegetation. 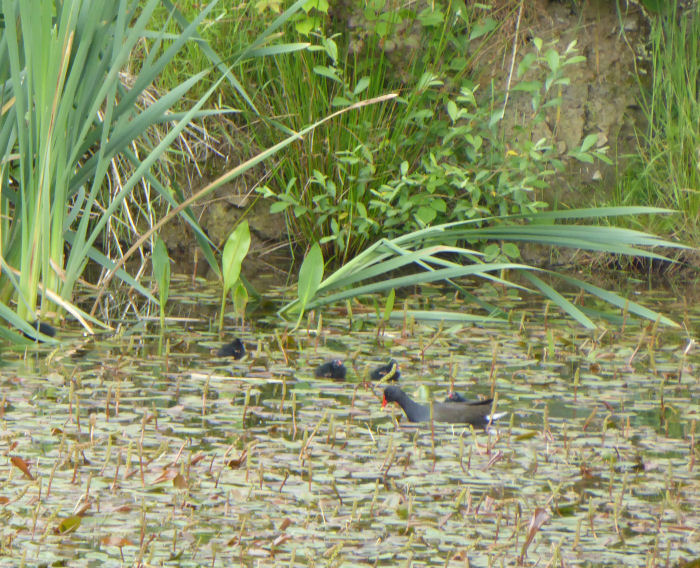 Out on the moor the sheep are eating their way through the grass, but these ones preferred the path, curious to see the volunteers who were trying to count them all! 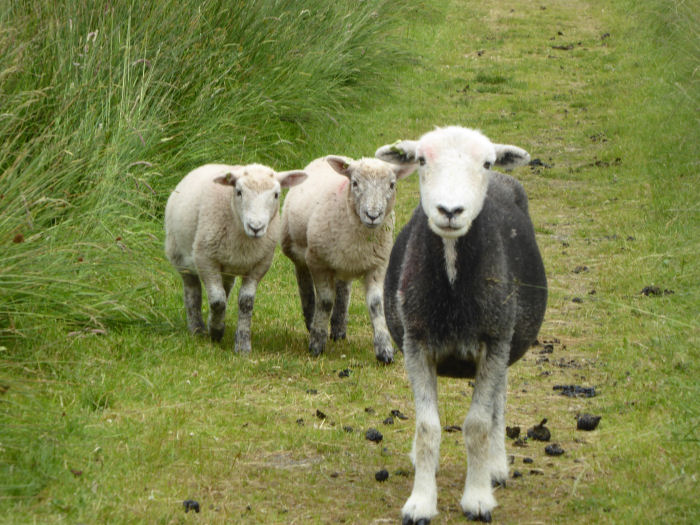 Andrew followed this Dark Green Fritillary, until it settled and he was able to take a photograph, the first of the season. (Unfortunately the Brimstone Elizabeth chased around the back garden did not settle long enough for even an out of focus splodge!) 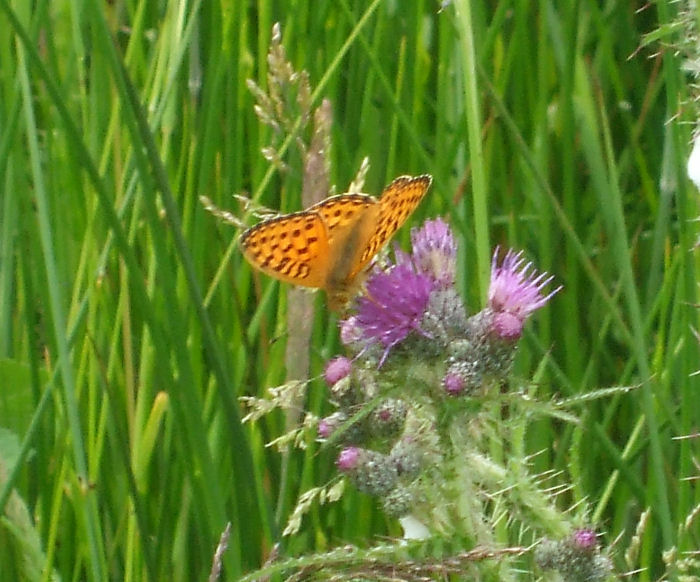 Out on a net round, Tony reported seeing the Kingfisher and so the weir net was put in.  It was checked throughout the day to no avail, although the Kingfisher was seen flying under the net!  On the last net round it was caught!  As always with birds that we do not catch too often a check was made for anyone who had not ringed one before, in this case it was Adam.

Hopefully this juvenile will give much pleasure to vistors, as it fishes from the many perches on the lake. 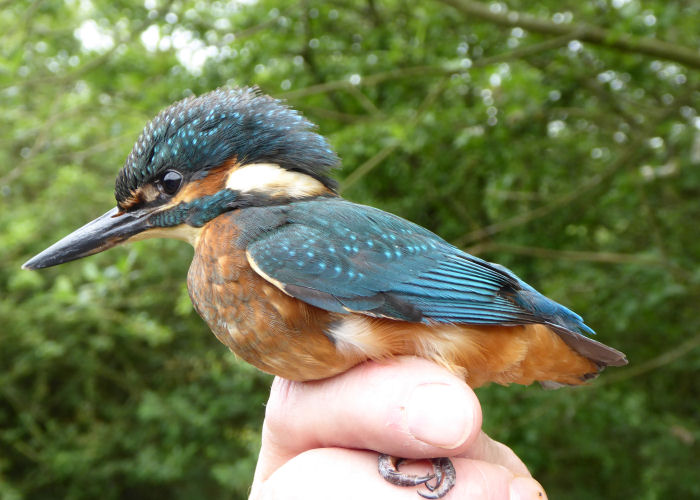 It is often only the flash of brilliant blue that is seen as the bird flies to and fro. 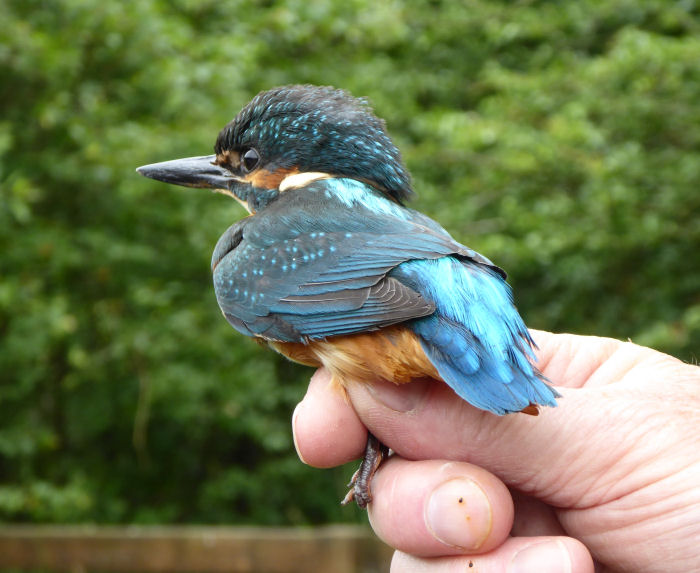 A visitor caught the moment that Adam released the bird. 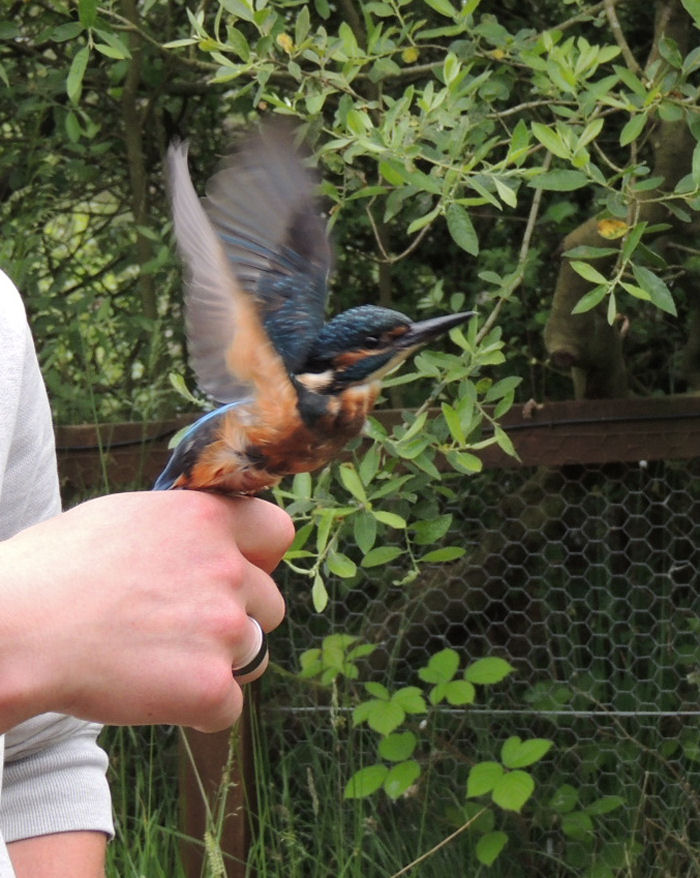 CES 6 means we only have 6 more visits to complete this year and possibly a later start for CES 7?  We continue to ring new Bullfinches, today 17 were processed.  Juvenile Robins also visited the ringing room and some are just beginning to grow their tiny  red feathers.  Wrens are often heard scolding visitors and volunteers as they walk the reserve.  11 Wrens now sport their new rings.  Another rare visitor to the ringing room was a Stock Dove, one of over 150 birds that were processed today.

A combination of weather conditions (wet, hot, cold?) and habitat management have resulted in orchids, Northern Marsh, Common Spotted and their hybrids, flowering all over the reserve.  The back garden, outside the ringing room, is full of Common Spotted Orchids.  (Thank you again to those volunteers who go around each flower, when mowing and strimming!) 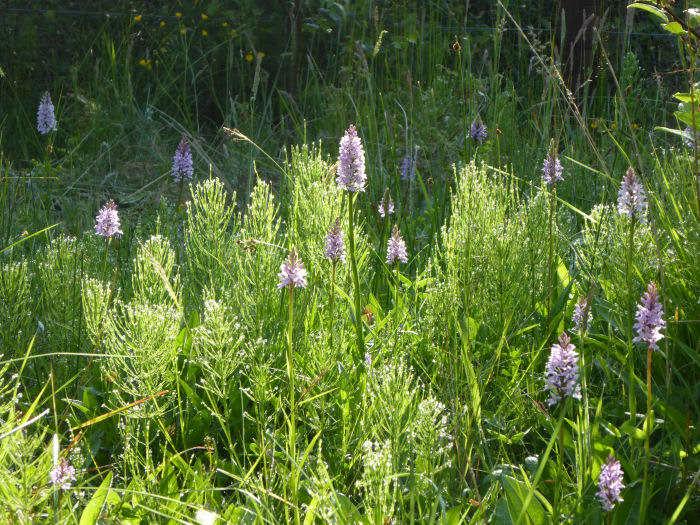 Almost unrecognisable without his work clothes, Colin was spotted in the Scrapes.  His mission today was bird watching, not working.  His irrefutable Royal Air Force panache remains extant although the volunteers are going to club together for a new hat to replace this one (which he is reputed to have bartered at the RAF Changi car boot sale in Singapore way back in 1958!)  Some have suggested he was conned! 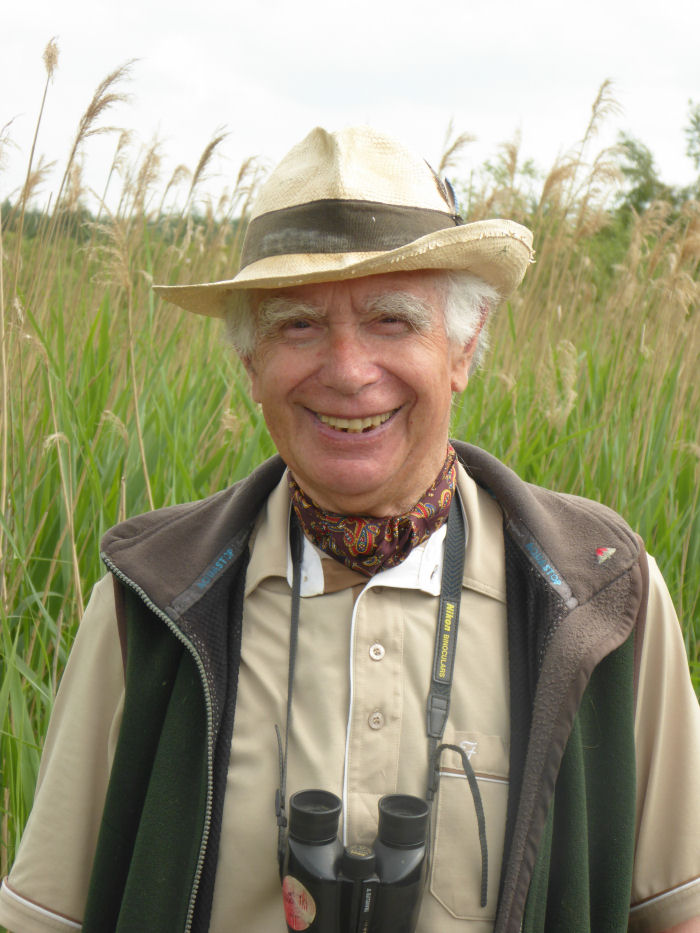