Recently, one of our volunteers has been attempting to trap and record small mammals on the reserve. With fifty Longworth traps on loan from the Mammal Society it was hoped that several different species would be recorded. Hours were spent setting the special traps correctly and with the right kind of food to keep voles and shrews going for several hours. 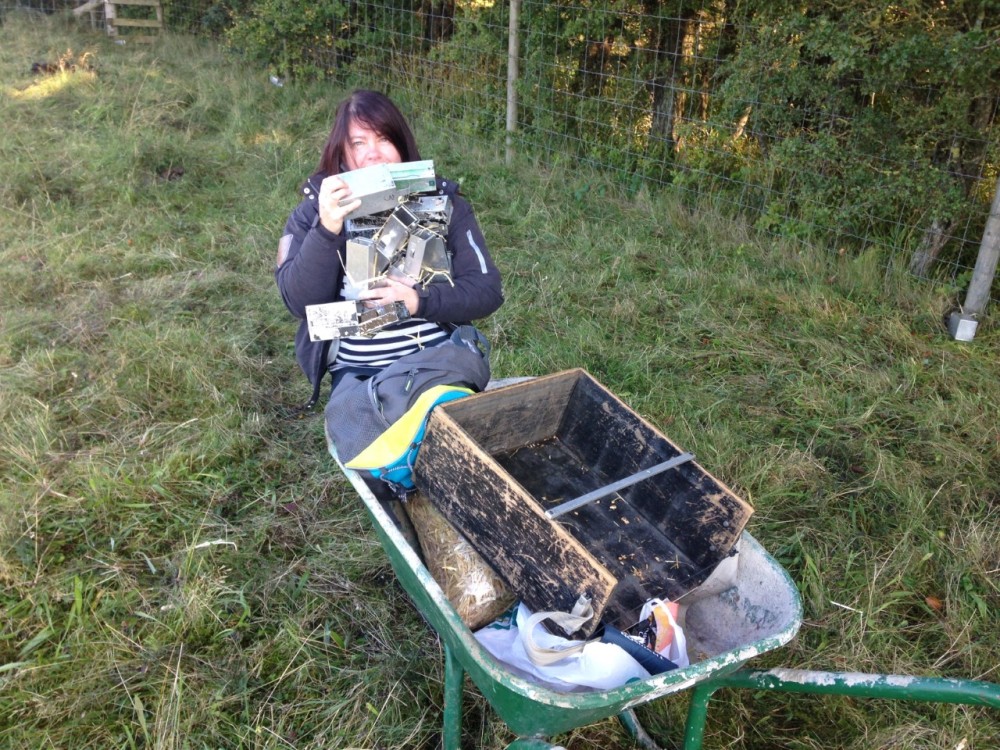 However, the results have been really disappointing with so far only one Wood Mouse turning up! This is maybe not such a surprise as a lack of small mammal sightings was definitely the case over the summer months. In previous years Field Voles and Pygmy Shrews were often seen out in the open and there was plenty of evidence of them such as 'runs' (tracks and trails) in the grass. The ringers have noticed a lack of owls this year and this was thought to be linked with poor vole numbers. Although Barn Owls have been seen more regularly in the daytime perhaps giving the impression that their numbers were good, this could have been a sign that they were hungry and out hunting when they should have been sleeping. Eighteen dead Barn Owls were handed in to reserve staff during the summer and most of these had been found in the road having been hit by a vehicle. All of them were very thin indicating a lack of food. In nest boxes where chicks were raised the number of young was down too with several not surviving (when food supplies are low owlets will resort to eating each other).

With the State of Nature Report 2019 findings this seems to be just a part of a depressing 'big picture' of biodiversity in the UK. The report is written by the NBN (National Biodioversty Network). According to the document there has been a 13% decline in the average abundance of species  (8,418) studied.  Since 1970 60% of priority species have declined.  A quarter of moths have been lost, and nearly one in five butterflies.  48% of moth decline is due to climate change, which also accounts for 60% increase in aphids.  The intensification of agriculture is also cited as a key driver of species loss.

Almost one in five plants are classified as being at risk of extinction, along with 15% of fungi and lichens, 40% of vertebrates and 12% of invertebrates. Habitat loss is a big issue for example 97% of the UKs wildflower meadows have been lost in the last century.

The NBN recognises the importance of volunteers who record and collect data such as the moth group, butterfly recorders and bird ringers at Foxglove and the experts who verify this data at County level and on a more positive note according to them the number of people recording wildlife data has swelled over the last 50 years and technological advances will only make it easier for people to record and share data. Furthermore, structured citizen science projects are growing in popularity and other projects are focused on engaging more people with the wildlife around them and making nature more accessible. Plus, studies have shown that being outside in green spaces has a positive impact on our mental health. So, there are multiple reasons to get outside and multiple ways to get involved with recording wildlife so that even more species and records can be included in future reports.

Here is a statement from the NBN:

“We owe a debt of gratitude to those devoted people in their wellies and raincoats with their notebooks and mobile phone apps, without whom we would not know which species had declined or increased over decades.  Without this, it would also make it difficult to know what practices were detrimental to the environment or whether conservation projects were working.

The data these dedicated recorders collect should not be underestimated.  It plays a vital role in increasing knowledge about the UK’s wildlife, which is so important, not only for scientists, but for all of us.”

So keep up the good work folks!