This time of year is very busy for the bird ringers as they have to check all the nest boxes to ring the chicks.  Because of the changeable weather some owls have chicks that are nearly ready to fledge, whilst others are still very small.  Eco Club children were taken to an owl box on the training area to see two young owlets ringed.  These were small and still covered in down, although their pins (where their feather grow from) could be seen on their wings.  The children were able to see the owlets close up.

Tony explained why they were ringed.  He also mentioned their diet when he looked in the box, Rabbit and Blackbird on this occasion!! The owls were then carefully placed back in their box. 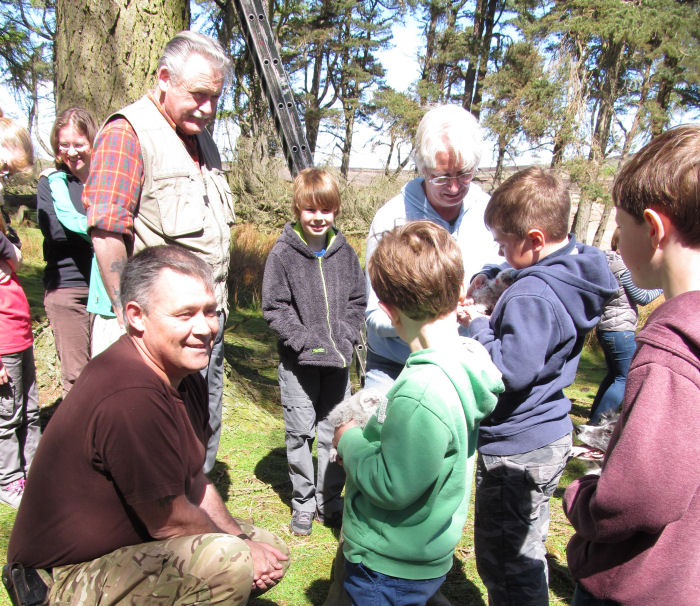 The next task was to hunt for Lapwing chicks but some Red Grouse chicks were found first!  Under supervision the children were allowed to hold the chicks and to see their beautiful plumage.

The welfare of the birds is always put first and so these chicks were taken altogether to be released, and then the children moved away quickly.

Adam was sent on ahead to look for Lapwing chicks and two were eventually spotted.  They are very well camouflaged.

Once ringed they were released and as they walked away they were feeding on tiny insects!

Another stop and a Wheatear nest was found.  These birds are summer migrants.  They nest down rabbit holes and this particular one was very long!  Seven young chicks were in the nest, just a few days old.  These were ringed and in the future someone may send us information about these birds.

A very special day.  Thank you very much to everyone who helped in such a variety of ways, spotting chicks, ringing, carrying ladders, opening gates and driving.